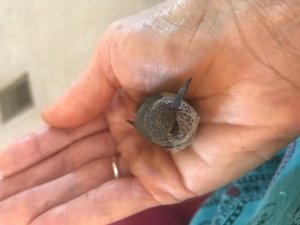 I’m finally settled in Española, New Mexico. Since I got here, I’ve been feeling the daily support of the community and the medicine power of wild animals, expansive mountains,  sunflowers, jujubes, and even an apple orchard. There’s an organic symbiosis of myself and the environment that speaks to me about the fragility of life as it shows in our daily practice.

When leaving California two months ago, I didn’t think I would be so blessed. I moved because I wanted to practice Kundalini Yoga and Meditation in community  at the “Mother Ashram” in New Mexico and I wanted to dive deep in Sikh Dharma, the ethical foundations of my spiritual discipline. When I got here, I felt that I was leaving my past behind as if in a dream, walking into a hologram of a new higher vision of myself.

The Adi Shakti, the primal force symbol of creation, was guiding me in visions. I could feel my heart was aligned with the fearless, creative energies, calling in a peaceful vision of the future, one that is sustainable and inclusive, not just for the planet but also for myself. And before I knew it, I was packing and moving to New Mexico. I was able to confirm, through my calling, there was no greater force next to God than our creativity and feminine grace, and no greater joy than joining a group sadhana through three hours of praying, yoga, and chanting every day.

The environment also welcomed me with a few surprises. I encountered a red snake, the power symbol of women’s knowledge and healing in most traditions–shedding skin layers and helping to shed the EGO–and I rescued a juvenile hummingbird right in my backyard. The fragility of his body taught me to stand still at the center, while also traveling the four directions. This apparently was the bird’s medicine, as a Native young man who works at the ashram farm told me. Exploring the ancestral land of Native Americans all over New Mexico, their traditions and wisdom, I’ve also enjoyed the abundance of apples, jujubes and sunflowers that grow everywhere, and I’ve have gained more mindfulness of nature and my own body, watching how the summer is giving way to the fall, my practice also changing from one day to the next, one week and month to the next. And as I fortify my body and my mind with daily yoga sets and lots of breath work and mantras passed from generation to generation, from thousand of years of yogi knowledge, I am more ready to embrace what’s there, in the present moment, awaiting for me to discover in this land of broken dreams for many people who forcefully gave up their lives and homes to give way to “modern civilization.”

At the ashram, surrounded by Native American communities, it’s hard to ignore the sorrows and collective anguish of this land. As woman, I feel it even more, for we are the containers, the space holders and shape-shifters in these times, when large-scale changes are happening all around us. The burning of the Amazon Forest is one of them, and like those ancient goddesses and priestesses when healing the wounded and bringing peace to the weary, I felt call to answer and took this beautiful small creature to the Widlife Refuge. Miraculously, it survived and it filled my day with its medicine–of love and their awareness of the four directions.

My move in the midst of environmental changes (the fires in California and the Amazon) also reminded me of the vestal virgins who protected the sacred flame in the Roman temples, and who took celibate vows and prayed in oracles for political security. Every morning, Iv’e been holding space for the suffering of the world through my practice, and even though it feels full, it’s also liberating and my worry finds a natural, organic balm in prayers sent to the Earth and Sky, as ancient yoguinis did for thousands of years. The more I dive into my practice, the more I feel at home in my soul and heart, in connection to their desire for the feminine to thrive over time.

Afro-Caribbean ancient legends come to the surface for me, when in a Yoruba wisdom tale (pataki), the male Gods excluded Goddess Oshun from their plan of populating the Earth, and She made every woman barren. Finally, fertility was restored when the Orishas made Her the guardian of family and creativity. In response, She asserted her voice as a powerful paradigm shape shifter, restoring balance to the feminine and masculine energies. The more I learn about Kundalini Yoga and the Adi Shakti, the primal force of all creation, the more I’m reminded of the powerful force women are in this Aquarian Age.

These past few days, I’ve also been noticing how my Outer Moon center (the chin for men and women alike), as well as my Inner Moon Centers–the hairline, eyebrows, cheeks, earlobes, lips, nipples, navel, clitoris, vagina and inner thighs–are all constantly changing, influenced by the planets orbiting next to Earth. The New Moon in Leo this month was on the waxing curve, embracing and taking in new virtues, open to creativity and transformation, two weeks into the cycle of the Full Moon in Virgo, getting us ready to shed what no longer serves us–emotions outbursts, negativity, and tension. A good meditation for Full Moon times is the Antra Naam Mudra (also called Kabadshe Meditation). I sit in easy pose, spine straight, buddhi mudra (thumbs and little fingers touching, the rest straight), hands on knee and while feeling the rhythm in every cell, I chant the mantra: SAA RAY SAA SAA, SAA RAY SAA SAA, SAA RAY SAA SAA, SAA RUNG, HAR RAY HAR HAR, HAR RAY HAR HAR, HAR RAY HAR HAR, HAR RUNG. SAA means the Infinite, the totality, God/Spirit. It is the subtle element of Ether and contains all consequences. HAR is the creativity of the earth, it dense element, and it is the power of manifestation, the tangible, the personal. UNG brings them together, in complete union, for prosperity, creativity, and protection, and it gives new power to one’s words. During the Full Moon, we bring the hands flat together in Prayer Prose at the Navel Point and bring them up the front of the torso, passing through the heart center all the way to the eyebrow opening them in a lotus flower with the base of the palms together.

As we celebrate Yogi Bhajan’s birthday this month–with the theme, the world is burning in honor to bring awareness to the fires in the Amazon and elsewhere–and the Ashram receives people from all over the world as well as offers summer classes and trainings, I feel gratitude for Yogi Bhajan’s courage to answer the mandate of his teacher, Guru Ram Das, to bring YOGA to the West, so that we could experience this ancient powerful technology and lifestyle from the north of India. As that juvenile hummingbird flying in all four directions at once, I can still keep my center in view of all overwhelming emotions that leaving a home and moving to a different one may entail, yet aligned with my truth and the truth of my yoga practice I believe so fierce fully since day one. Now I know what the word YOGA means–experienced at firsthand–the union with infinity, with the Spirit within us and all around us. For when we are completely aligned with the vibrant sound of life, as we flap our wings and remain still in one place, we are able to reflect back to the world the wonders of our soul and heart, wishing that those same wonders could be enjoyed in all four directions by all people, from all ancestral wisdoms and knowledges, and that those same winds would spread awareness about the tending of our individual bodies and collective lands. AHO!

Satnam, in love and service

Because these cookies are strictly necessary to deliver the website, refusing them will have impact how our site functions. You always can block or delete cookies by changing your browser settings and force blocking all cookies on this website. But this will always prompt you to accept/refuse cookies when revisiting our site.