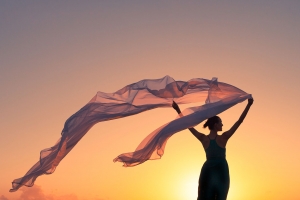 When women immigrate, we change our cycles and natural rhythms; we may be inundated by a sense of loss or transformation. It takes a while to get back in our two feet, especially if one’s identity depends on official documentation issued by the country we migrate to. This is the story of Paulina—an excerpt from my upcoming book, Nideaquínideallá, I’m From the Borderlands: A Goddess Journey from Trama to Rebirth.

“Bwak, bwak,” two hens greeted me when I walked into Paulina’s apartment in Washington Heights, a charming, old Jewish neighborhood that became the largest Dominican neighborhood in the United States in less than two decades.

“I still look for eggs every morning, as if I was back in Santo Domingo,” said Paulina, waving at the hens to go to their nest.

“Would you like some coffee?” Paulina stood in the kitchen door and finished pulling her dark hair in a pony tale.

She tucked a red shirt into her tight pants up and we both sat on the couch. Paulina was a short immigrant woman in her late thirties, with African features and a light complexion. She spoke in a soft voice, but unlike other women I met, she switched back and forth from English to Spanish with ease. Still, she had a nostalgic expression in her eyes. I pulled out the tape-recorder and placed it next to the flowered sugar jar. There were some papers on the table and she moved them to make room for us.

“Those are the papers I need to fill out and take to city court,” her hands moved with hesitation, “Now that I’m documented I want to change my name back to Rosa. Paulina was my phantom name.” She paused and added. “Paulina was that brave woman who came to the United States, and Rosa, that young girl who stayed behind in Santo Domingo.”

“Can you tell me more about that young girl?” I didn’t want to lose that window into her past even though it was a hospital visit. We had a questionnaire to fill out but I wanted to know more about Paulina’s migratory journey.

“Oh, it was a long time ago, early seventies. I grew up with both my parents and twelve siblings in a small isolated town outside of Moca, a rural place in the Cibao region. We lived off the land and grew tobacco, cocoa, potatoes, and other vegetables. We also harvested many fruits that grew in the Caribbean like mangos, avocados, and pana or grapefruit bread. Those were the good old days. Everyone knew each other and looked after each other.”

“What motivated you to migrate to the United States?”

“I lived in the capital city with my first husband. I was working in one of those factories that exported the clothes back to the United States. I wasn’t doing well with my husband so I decided to get a divorce and I moved back with my parents. Everyone thought I was a bad wife and mother.”

I nodded in empathy. “Did that help you to make the decision to migrate?”

“I suppose. It was my father’s idea, and I went along.” Her fingers fidgeted. “I always thought it was my destiny to travel.”

“Well.” She leaned forward and hesitated to tell me. “When I got to the airport, I stood there without knowing what to do, as if I had arrived at another planet. My passport photo didn’t even look like me. I traveled with a machete, with someone else’s I.D. card. I think I got in because of my own ignorance, or immigration didn’t care and let me in. After you pay for the trip you don’t think about anything else except getting here.”

Her face lit up. “I still save as a memento the same pillowcase I brought with me with a blouse, a skirt, and some panties.” Her hands touched mine. I couldn’t take my eyes off her. “It takes courage to leave your family behind, not knowing when you’ll see them again.”

She added, “It was like telling the world, here I am.”

[Disclaimer: The stories in this Blog do not coincide with the women in the pictures. Names have been changed. I am solely responsible for the facts gathered and on which the stories and images are based. Nonfiction narrative asserts descriptions understood to be factual and may incorporate fictional elements to clarify and enhance them.]

Suscribe to our Newsletter and receive a free gift: How to build a Sacred Space for an Altar Home and Daily Morning Affirmations.
Scroll to top